As a kid, I had several albums of stories told by animated readers. My brothers and sisters and I would gather around our little blue record player, crank up the volume, and sit spellbound as we listened.

I vividly remember one called, The Boy in the Moon. A deep male voice told the story of a little boy who lived with his loving family in a land far away. The boy had everything and yet, nothing made him happy. Nightly his father asked him what was wrong. And mournfully the boy pointed up to the heavens and said,

The story goes on to tell how after years of seeing his son unhappy, the father decides to grant the boys wish. So one night he puts the boy in a boat and rows and rows until they reach the place where the ocean meets the sky. There they find the ladder that leads to the moon.

The father kisses his son and sadly watches as he begins his climb. For the rest of the father’s life he misses him, but is comforted by waving at the moon, knowing his boy is happy.

Each time I listened to that story, I thought it was the dumbest thing I ever heard. All my life I wanted a loving father. And the thought of a child leaving a happy family to go live all alone on the moon seemed so stupid to me. I never could see what the moon had to offer over a father whose greatest desire was to see his son happy.

I always wanted to rewrite that story. I wanted it to end with the boy coming to his senses. I imagined him dangling from that ladder until a boat comes by to take him home. I imagined the look of joy on the father’s face knowing his son finally realized there is nothing greater than a family, not even the fulfillment of his wildest dream. 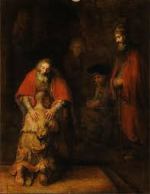 I hate to think how much time I’ve wasted pining after dreams, that if fulfilled, would have been a disaster. How grateful I am for a loving Father who has many times, patiently waited for me to come home. And each time I do, He runs out to greet me.

How about you? What dreams are you chasing? Is it time for you to turn around and go home?