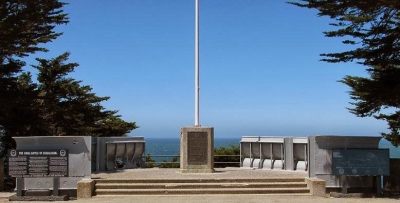 Not long ago I visited the remains of the World War II cruiser, the USS San Francisco. The memorial sits imbedded on a hillside overlooking the San Francisco Bay. Its bow is pointed due south toward Guadalcanal.

Over sixty years ago it led a convoy of American ships in a fierce battle against the Japanese fleet. Still visible are the many holes ripped through her thick steel.

On that bright sunny day, a cool breeze blew across the bay. Behind me the bright red towers of the Golden Gate Bridge peeked up over the treetops. I listened intently as my Uncle Eugene shared some of the history of this great cruiser. How it had withstood the attack of twenty-five Japanese bombers, with one crashing into the ship killing 30 sailors. How in 1942, the USS San Francisco steered right through the middle of the enemy’s fleet. Taking on fire from all sides, it caused so much confusion, the Japanese fleet fired on their own ships.

This plaque dedicating the memorial reads:

…A very powerful Japanese force was moving at night towards our positions in the Solomon Islands. The spearhead of the force that we sent to intercept the enemy was under the command of Rear Admiral Daniel J. Callaghan. He was aboard the leading ship, the cruiser San Francisco. The San Francisco sailed right into the enemy fleet – right through the whole enemy fleet – her guns blazing. She engaged and hit enemy vessels, sinking one of them. At point blank range, she engaged a enemy battleship – heavily her superior in size and firepower. She silenced this battleship’s big guns and so disabled her that she could be sunk by torpedoes from our destroyers and aircraft. The San Francisco herself was hit many times. Admiral Callaghan, my close personal friend, and many of his gallant officers and men gave their lives in this battle. But the San Francisco was brought safely back to port by a Lieutenant Commander. And she will fight again for our country…
Franklin D. Roosevelt
November 17, 1942
As I stood there, I wondered what it was like to bring that damaged ship back to the city for which it was named. I imagined the it quietly chugging underneath the Golden Gate Bridge – all men on deck, weary from the recent battle, yet gaining strength with each mile. I felt the pride they had pulling the ship into port with the entire city of San Francisco there to welcome them home.


For days, I couldn’t stop thinking about how good it felt to stand on top of that rubble. I marveled at how I could feel the strength of those men who fought that battle so long ago. It amazed me how their story and some beat up metal could inspire me so many years later.

Daily, we all fight battles. Few of us will ever experience the kind of conflict the men of the USS San Francisco saw. But, our struggles are real and painful. And many times we fight them alone.
My experience on the USS San Francisco taught me the importance of allowing more of my battle scars to show.
For if I were to peel back the layers of my heart, you would see scars where enemy fire has penetrated my toughest armor. I too have been fired on from all sides. I have large scare where my father’s death tore a huge hole in my heart. I may say, “please don’t touch, the wound is still not healed.” Or I may show you the large bruise left by my son’s arrest. Two big battles God has helped me overcome.

Feeling the power of that struggle aboard the USS San Francisco made me wonder. What if hiding my personal battle scars robs the people around me of the opportunity to witness my strength and endurance?
Perhaps hiding our scars or polishing them up before revealing them does a disservice to those we have the greatest ability to inspire.
Like that great battle cruiser, enemy fire has damaged my exterior. Many times I’ve nearly broken under the weight of the struggle. But no matter how weary I become, I’m determined to keep my ship headed for home.  I may not be pretty when I get there, but I know there will be a crowd to welcome me home.