It sat in our yard for years. And it drove me nuts. Tim’s pension for keeping cars long after they were of any use was the source of many an argument. If it didn’t run, I wanted it gone.

But I never imagined the old Suzuki Samurai would come to its end this way. But to hear Daniel tell the story, you’d be in stitches.

That’s right, cause they cut up that car. It became a challenge to get the pieces small enough to spread them out in dumpster all over town. And all these years later, Daniel can tell you where every piece went.

“Mom, we put the transmission in the dumpster behind the 7-11 on Liberia. And the drive train went in the one behind Osbourn Park High School…” 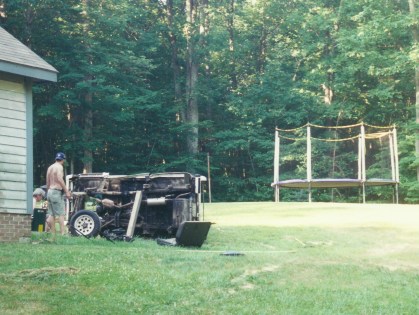 I could just imagine them, laughing all the way to their next destination. Pleased with themselves for the clever way they went about making mama happy.

They had the time of their lives, and they did it their way. Now you can lecture all you want on the rights and wrongs of what they did. But on this anniversary of what would be Tim’s 62nd birthday, I’m grateful my son has such a crazy memory of his father.

And just last week, Kelly and I were talking about that ridiculous Suzuki and how Tim and Daniel chose to dispose of its parts. And she said, with tears in her eyes, “If I had it to do over again, I’d have cut it up with them.”

Tim beat to his own drum. And many times, he needed to rein it in and follow some rules. But just as many times, I needed to relax and go with the flow. If for nothing else, but to create a lasting memory in the hearts of our children.

Happy Birthday Tim. You left an impression on us that I’m grateful will never go away.

So my friends, what adventure do you need to join in on? Go ahead, throw caution to the wind, and do something crazy. 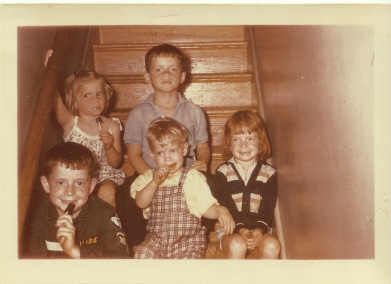 They were a treat. Every time we went to Sears, Mother let us pick our own flavor. The big thick square lollypops sat in a display at the check out counter. My favorite was butterscotch. The day she took this picture, all five of us got one.

Sheila, my big sister is about six. She holds hers as she obediently smiles for the camera. Alfred, my oldest brother has his just outside his mouth, as though he took it out just to smile. I can’t see my brother Jim’s, knowing him, he didn’t even open it. He probably saved it for another day. Brian can’t be older than two. He’s got his plunged deep in his mouth. He doesn’t seem to care about the picture Mother is taking.

Me, I’ve got a sly smirk on my face. My lollypop is right our in front of me, already half eaten. I’ll finish it off as soon as Mother’s done.

That day, Sheila and I should have been punished. We decided to play “hair dresser” with Kathy, the girl across the street. With her mother’s big scissors, I whacked off Sheila’s long red ponytail. Then Kathy snipped off my blond curls. I had the throat of the scissors locked on Kathy’s ponytail when her mother walked in and gasped.

Our Mother spent the afternoon straightening the ends of our hair. When she was done, it barely covered our ears. We went to Sears afterwards. I picked my lollypop from the display.

Back home, Mother saw the humor in our haircuts. She lined us up on the stairs and took the picture. Today, it sits in my office and it still makes me laugh. It reminds me of many things, but mostly lollypops and haircuts.

But really, it’s about how my mother didn’t let a little thing rile her. How she loved the creativity of her children. How she did her best to see the good in bad situations.

This picture reminds me to laugh at trials. To stop and take a picture, and that hair always grows back.